This week, for the first time since he took office, Trump faced a check on his power as the 116th Congress was sworn in. As House Speaker Nancy Pelosi took back the gavel, she made clear she will take Trump on, telling the Times she considers herself Trump’s equal, and the “TODAY” show that Trump can be indicted while in office. The 116th Congress, the most diverse by race, religion, and gender — on the Democratic side — stood in sharp contrast to Trump, who increasingly surrounds himself with rooms full of white men.

The government shutdown passed three weeks, with no end in sight, as Trump dug in his heels and Pelosi’s House voted to reopen the government without any funding for his wall. As the shutdown’s impact was increasingly felt across the country, including unpaid essential TSA workers calling in sick at four major airports, reporting indicated the Trump regime had not planned for or anticipated a long-term shutdown, and is caught flat-footed. Trump’s lack of empathy for those impacted by the shutdown, and threat to call a national emergency, further belied his autocratic tendencies.

Trump held a bizarre cabinet meeting in which he rambled on for 95 minutes, full of lies, revisionist history and self-aggrandizement — as his cabinet members took turns praising him. Although displays like this in his first year would be the topic of discussion for days, there was a notably shorter focus and reaction to the spectacle, as if truly we are the frogs in water close to boil. The federal grand jury seated in Washington D.C. for the Mueller probe was extended for an additional six months, as the 18 month mark passed. 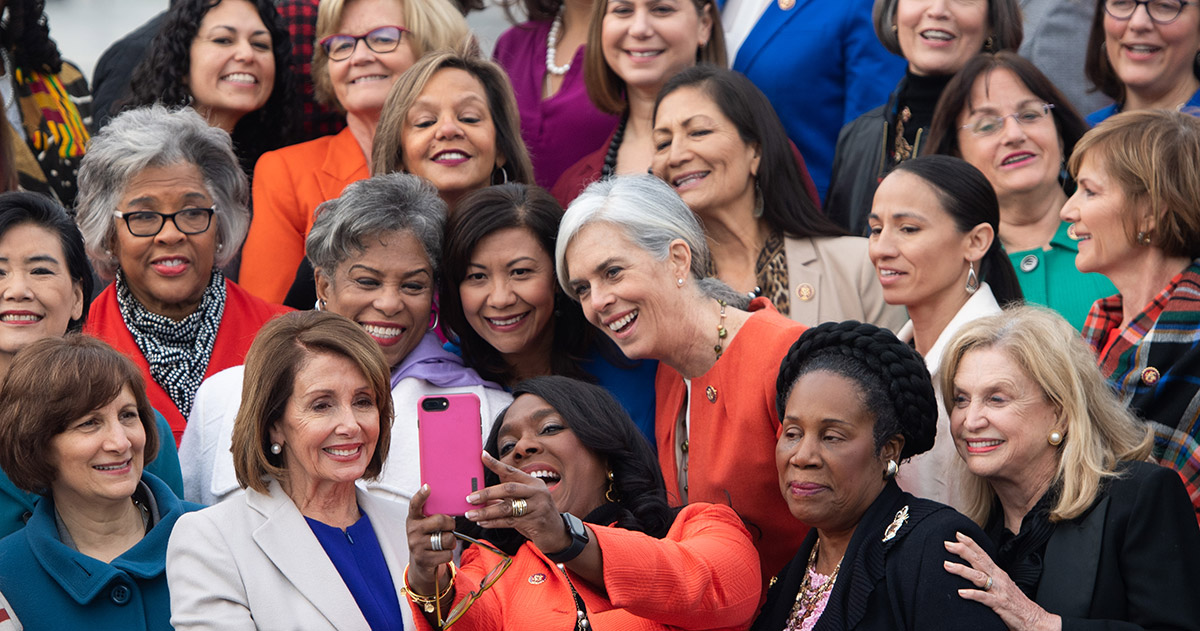 US Speaker of the House Nancy Pelosi (C L) takes a ‘selfie’ with US Representative Terri Sewell (C R) as they stand with female House Democratic members of the 116th Congress for a photo opportunity outside the US Capitol in Washington, DC, January 4, 2019.