This week our country was riveted as new allegations of sexual assault surfaced against Trump’s Supreme Court nominee, Brett Kavanaugh. On Thursday, 20 million Americans tuned in to the watch the Kavanaugh hearings. Despite Dr. Christine Blasey Ford coming across as poised and credible, while a belligerent Kavanaugh delivered testimony riddled with inaccuracies, Republicans planned to push forward for a confirmation vote on Friday. In a stunning turn, the power of the #MeToo movement and protests changed a key senator’s vote early Friday, pushing off Kavanaugh’s confirmation and forcing Trump to open a one-week FBI investigation into the sexual assault allegations against his nominee.

This week Trump was literally the laughing stock of the world, as leaders gathered at the UN General Assembly laughed out loud at a braggadocious claim during his speech. On Thursday, Trump held an 80-minute news conference, only his fifth since taking office, which was panned by media outlets as “bizarre,” “insane,” and “surreal.”

Increasingly, our country feels at war with itself, as Trump and white male Republican leadership readied to push through Kavanaugh’s nomination at any cost, ignoring the voices of women. Trump’s push on Kavanaugh threatened the integrity of another institution, the Supreme Court, while he continued his attacks on the FBI, the Department of Justice, and, his favorite target, the media. Notable this week were comparisons of the Kavanaugh proceedings to a storyline in “The Handmaid’s Tale.” 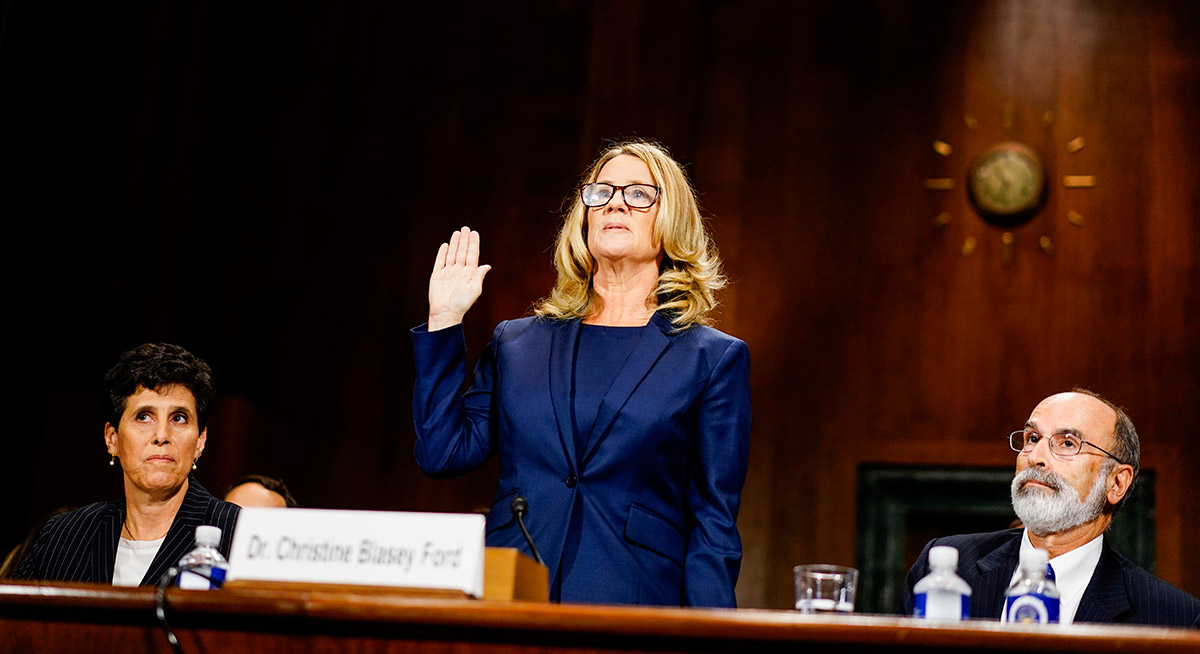 Christine Blasey Ford swears in at a Senate Judiciary Committee hearing in the Dirksen Senate Office Building on Capitol Hill September 27, 2018, in Washington, DC. A professor at Palo Alto University and a research psychologist at the Stanford University School of Medicine, Ford has accused Supreme Court nominee Judge Brett Kavanaugh of sexually assaulting her during a party in 1982 when they were high school students in suburban Maryland.