Things are getting worse in America, week by week. This week, as the West Coast saw wildfires spread, with much of California, Oregon, and Washington covered in smoke so thick the sun couldn’t break through and the sky was a hazy gray or shade of yellow and orange, Trump ignored it. Just as he skipped a commemorative ceremony in lower Manhattan for the anniversary of 9/11 — as if the blue states were not his responsibility — repeating a theme from the start in office: leader of his supporters, not the country.

This week Trump was engulfed in a second major scandal, as journalist Bob Woodward released tapes of conversations he had with Trump on a variety of topics, including Trump admitting he knew in early February that Covid-19 posed a dire risk — a fact he hid and lied about for months. One historian described it as “the greatest dereliction of duty” in presidential history.

This week reporting revealed the Trump regime’s embrace of tactics more familiar to an authoritarian regime than a democracy. Department of Health and Human Services officials sought to hide information and alter reports on the extent of the Covid-19 outbreak, while a whistleblower complaint portrayed Department of Homeland Security officials hiding intelligence on Russian interference, and altering reports to blame left-leaning groups for violence. There was more shocking news about the Justice Department intervening in a case for Trump on a personal matter, while a top deputy of John Durham resigned from his investigation of the investigators, citing pressure from Attorney General William Barr to finalize a report before the election. The Treasury Department sanctioned Andrii Derkach, described as an active Russian agent, who had been a source of information for both Rudy Giuliani and Senate Chairs Ron Johnson and Chuck Grassley in their investigations of Democratic nominee Joe Biden.

America is a country at war with itself, with Trump stoking division as a campaign strategy. The apocalyptic skies of the West seemed to capture the dystopian feel of an exhausted, anxious, fearful, downtrodden America. Having failed to truly tame the coronavirus over the summer with no federal strategy and Trump refusing to even encourage face masks, the country now heads into fall and winter, with dire predictions on illness and death. 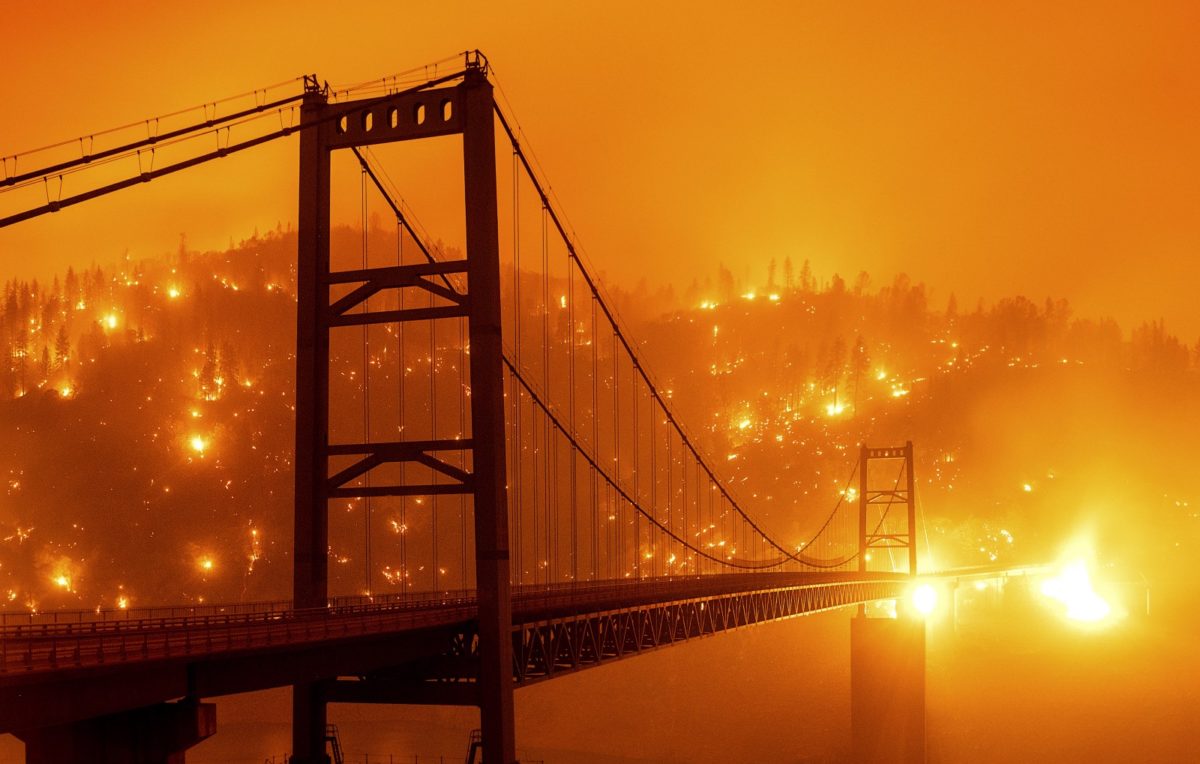 Embers light up a hillside behind the Bidwell Bar Bridge as the Bear Fire burns in Oroville, Calif., on Sept. 9, 2020. The blaze, part of the lightning-sparked North Complex, expanded at a critical rate of spread as winds buffeted the region.