On January 20, 2021 we were finally able to exhale, believing our near brush with authoritarianism was behind us, and that with President Joe Biden taking office our country and political system would return to normalcy. The ensuing months proved otherwise. Elected Republicans continually questioned the 2020 election results, and attempted to rewrite history, including casting the January 6th insurrection at the Capitol as a mere “tourist visit.” Rep. Liz Cheney, a critic of former President Donald Trump, was removed from House leadership and replaced by a loyalist, Rep. Elise Stefanik.

Instead of righting itself, the Republican Party has been subsumed by Trumpism. Nearly 6 in 10 Republican voters say believing the Big Lie that Trump won in 2020 is an important part of their party identification. At the same time, Republicans have quietly and methodically taken steps to be in a position to overturn the 2024 election. The 2020 election aftermath may well be a harbinger, much like Hitler’s Beer Hall Putsch or the 1905 Russian revolution, a dry run for a coup of our democracy.

Biden understands this too. He has spoken repeatedly about the need to prove a functioning government can deliver for the people. In his first joint address to Congress, he extolled, “We have to prove democracy still works.” We are still, one year later, very much in a battle for the soul of our country, a battle to determine whether we remain a democracy or descend into an authoritarian state. That is why the upcoming midterms are so critically important, and we all need to gear up and get engaged in saving our democracy!

The first part of the Republican playbook is widespread voter suppression. So far this year, 17 states led by Republican legislatures have used the Big Lie to enact restrictive voting laws. It’s a tried and true strategy of a party reliant on white, Christian voters—a declining proportion of our population—to deny the right to vote to people whose skin is not white.

Part of the reason it’s so easy to get away with voter suppression is the Republican Party’s long game of taking control of our nation’s highest court. After invalidating key parts of the Voting Rights Act in 2013, in July 2021 an even more conservatively-stacked Supreme Court signaled their disinterest in protecting the right to vote in a  6-3 ruling on Brnovich v. Democratic National Committee, allowing two Arizona voter suppression provisions to stand.  The ruling makes it substantially harder to challenge restrictive measures, effectively leaving it in Congress’ hands to pass voting rights legislation. That window could close after the 2022 midterms.

Already these measures, accompanied by aggressive gerrymandering in some GOP-led states, will make the climb to keeping our majorities that much steeper.  Take Georgia, for example, where Sen. Raphael Warnock is up for re-election, this time facing 16 new provisions enacted by Republicans to limit voting. Losing our majorities in the midterms would disable our last safety valve at the federal level to protect against GOP efforts to subvert our democracy with voter suppression. Without federal legislation, these efforts at the state level would go unchallenged—save for states led by a Democratic governor.

Not coincidentally, another target in the Republican playbook will be Democratic governors.  Just last week, Gov. Gretchen Whitmer of Michigan vetoed restrictive voting bills put forth by the state’s Republican-led legislature. It was a test flare. Republicans are hyper-focused for 2022 on three key states: Michigan, Wisconsin, and Pennsylvania. Ring a bell? In 2016, a mere seventy-seven thousand votes in these three states delivered Trump the presidency. The same three states were also key to Biden’s 2020 victory. On the ballot next year in all three states are the roles of governor, attorney general, and secretary of state—the safeguards not only from voter suppression laws, but also for overturning state results.

Trump had a practice run with overturning the will of voters in 2020, coming closest in the state of Michigan. He invited two Michigan state legislators to the White House, while his allies and lawyers put forward fake claims of widespread voter fraud in Wayne County (part of Detroit with a large Black population). The Michigan State Board of Canvassers eventually held hearings before finally certifying results weeks after Election Day. It was a cliffhanger. As someone who closely monitored the transition of power, it was the one time I feared Trump could invalidate a state’s results and set off a domino effect, overturning the election and ending our democracy.

Ahead of the 2024 election, Trump has been priming his base with the Big Lie. A recent poll found just one-third of Republicans say they will trust the 2024 election results if their candidate loses. Republicans, inspired by Trump’s false accusations of widespread fraud, have been systematically threatening election officials and their families, causing an exodus of experienced workers—many of whom will be replaced by Trump loyalists. Imagine a scenario with a close election, but this time Republicans control the House and Senate, and key state positions in the three states stacked with his loyalists. Who would fight back? This is the nightmare scenario the GOP is quietly cobbling together. This would spell the end of the great American experiment in democracy!

As dire as this sounds, it is not too late to fight back and protect our democracy. We know how to do this. We organized resistance groups in 2018 to take back the House, and then in 2020 the White House and Senate. I know many are feeling exhausted from the combination of the Trump era and a once in a century pandemic which has left us with generational trauma. I get it. But it’s time to push the panic button, and awaken into activism! The feeling of calm now is but quicksand.

Reach out to your members of the House and Senate—send them this article—and demand URGENCY and action on voting rights! As leader of the Senate, Mitch McConnell carved out an exception to the filibuster to confirm Trump’s judges. We can and must do so too in order to protect the core of our democracy: the right to vote. In the end, we are the cavalry. No one is coming to save us. 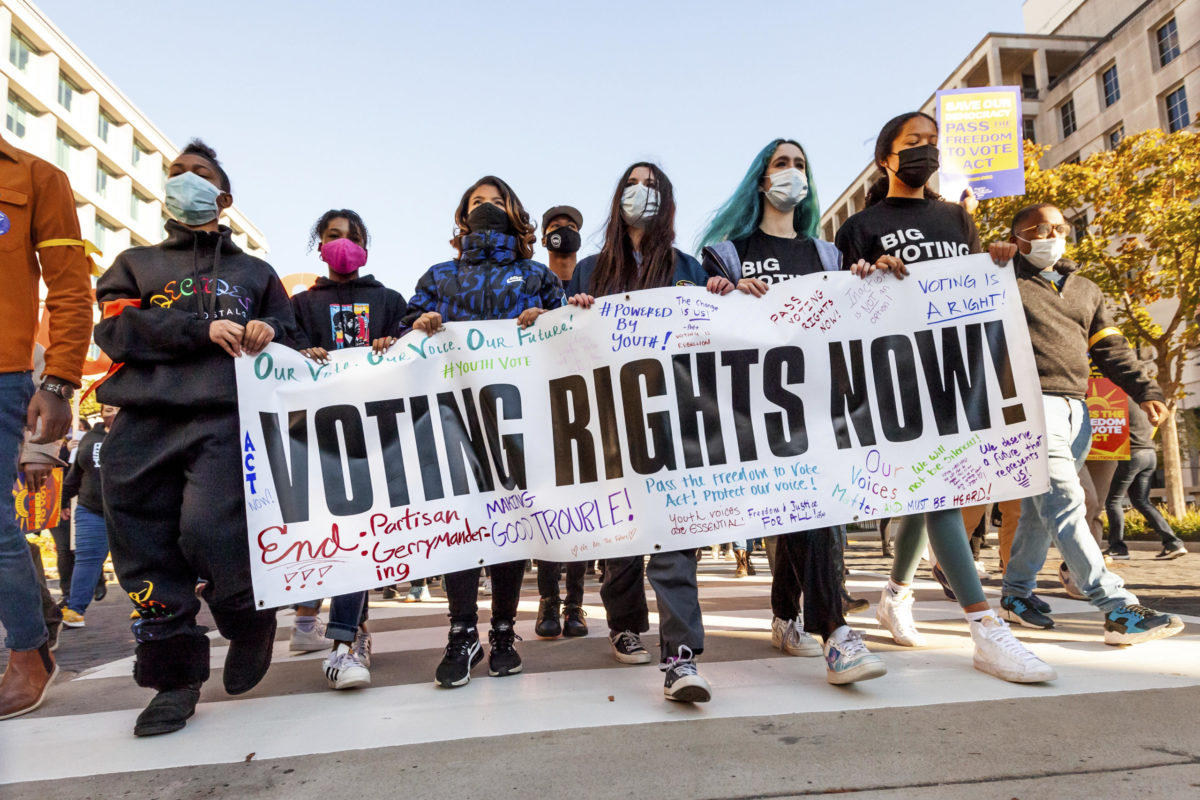 Young voting rights activists lead a march to the White House for a civil disobedience action. Protesters are demanding that the Biden Administration take the lead on voting rights and pressure Congress to pass legislation protecting the right to vote. Specifically, they want passage of the Freedom to Vote Act and DC statehood. (Photo by Allison Bailey/NurPhoto via AP)