This section is a list of broken norms from the transition period, starting on November 7, the day fortuitously Joe Biden was declared the president-elect and we reach the four-year mark (Week 208). The AFTER section will have separate lists for what remains of the month of November, the full month of December, and January through Inauguration Day.

We end the month of November, four weeks after Election Day, without Trump conceding. As Mary Trump’s book aptly warned us, Trump is seemingly unable to admit defeat, and, as has been typical over the past four years, a compliant, cowardly Republican Party quietly continued to enable an unprecedented time in our democracy — one that even the Founding Fathers did not account for. As we end November, only Republican leadership and most of its rank and file, along with Russian President Vladimir Putin, have yet to recognize Biden as the 46th president.

Trump has tried everything to steal the election. If the outcome had been closer, he may well have succeeded as we entered uncharted territory. Trump’s election fight included 41 lawsuits in six battleground states, 27 of which were denied, dismissed, settled, or withdrawn, and none finding any evidence of the widespread fraud he claimed. As the month went on, lawyers and law firms gradually dropped their representation, leaving it to Rudy Giuliani and a crew of misfits in what was truly an embarrassment for our country and world to witness. Trump requested recounts in Georgia and Wisconsin to prolong matters, and courted Michigan and Pennsylvania GOP lawmakers to ignore the will of the people and simply give him their state electors — despite his losing by wider margins than he won in 2016. This month, again fortuitously, ended as all six of these challenged states certified their votes.

Constitutional scholars noted the Founding Fathers did not envisage a president refusing to concede, or so openly mock our democracy and put self-interests ahead of country. Trump, who had always been a friend of conspiracy theories and lies, this month descended to a new crazed low, drawing comparisons to a “Mad King George” claiming “he won, he won” to a shrinking but compliant inner-circle willing to feed his alternative reality.

A positive side, and one I dare not tweet to draw attention to, is that while Trump is consumed in his efforts to steal the election (and play golf), not only has he abdicated his role as president — even as the U.S. recorded more than 4 million coronavirus cases while the pandemic raged out of control — but as well, he has accomplished little damage so far in November other than delaying Biden’s transition, a pardon, and some retaliatory firings. That might be the best we can hope for as we run out the clock of this nightmare in its final days. But noteworthy for the after period, had Trump been more competent and organized, he may well have pulled off overriding the will of the voters in some states and completing more destructive acts 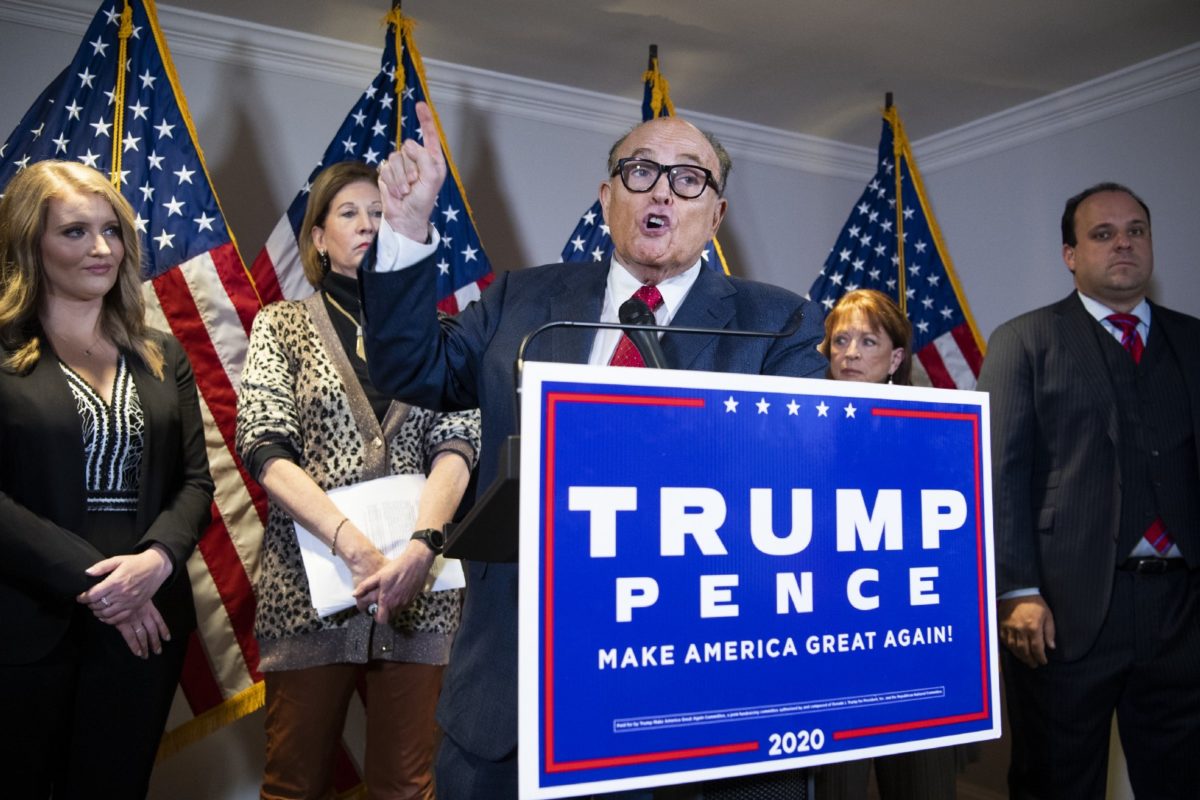 Rudolph Giuliani, attorney for Trump, conducts a news conference at the Republican National Committee, on lawsuits regarding the outcome of the 2020 presidential election on Thursday, November 19, 2020. Trump attorneys, Jenna Ellis, far left and Sydney Powell, second from left, also appear, as well as Joseph diGenova, Victoria Toensing, and Boris Epshteyn, who later tested positive for the coronavirus.